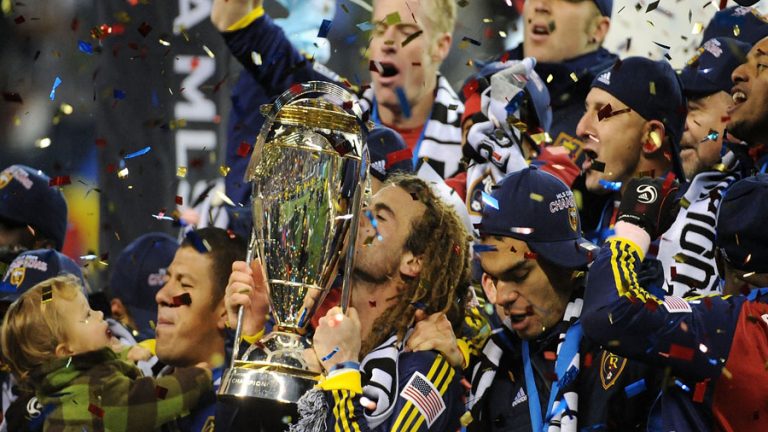 Kyle Beckerman #5 of Real Salt Lake kisses the The Philip F. Anschutz MLS Cup trophy as he and his teammates celebrate their win over the Los Angeles Galaxy in the MLS Cup final at Qwest Field on November 22, 2009 in Seattle, Washington. Real Salt Lake won 5-4 in a penalty shootout following regulation time. (Photo by Harry How/Getty Images)

SANDY, Utah – Real Salt Lake is giving their fans something to watch on Wednesday night to fill the void without live sports.

The club will begin their RSL classic series on Wednesday when they will air the 2009 MLS Cup Championship match against the Los Angeles Galaxy on RSL.com.

Real Salt Lake’s improbable run to the MLS Cup title included dramatic results in the final weekend of the season, a run through the Eastern Conference with wins over the Chicago Fire and defending MLS Cup champion and 2009 Supporter’s Shield-winning Columbus Crew in a shootout in Columbus before meeting the star-laden LA Galaxy in Seattle in the MLS Cup final.

The RSL classic series begins 7:00 pm Wednesday on https://t.co/tPNsEk9OAT with the 🏆

Tune in to watch how we earned our ⭐️@nickrimando will provide live commentary & player perspective on the #RSL twitter account as the game unfolds in Real time.

The Major League Soccer season has been suspended until further notice and players will not be allowed at the training facility until at least April 3 due to the coronavirus or COVID-19 pandemic.

Captained by Kyle Beckerman and with a roster that featured MLS stars Nick Rimando, Nat Borchers, Jamison Olave and Javier Morales, RSL squared off with David Beckham, Landon Donovan and the LA Galaxy in front of a crowd of 46,011 in 2009.

Rimando was named MLS Cup MVP for his stellar performance in net that included two saves in the penalty-kick shootout and Robbie Russell converted the decisive shot to clinch the Phillip F. Anschutz Trophy for the first time in club history. That victory kick-started a run of success for RSL that saw the club reach finals in the 2010-2011 CONCACAF Champions League, the 2013 Lamar Hunt U.S. Open Cup and the 2013 MLS Cup while also consistently finishing among the MLS elite during the regular season each year.