19 MLS teams now onboard with BodyArmor 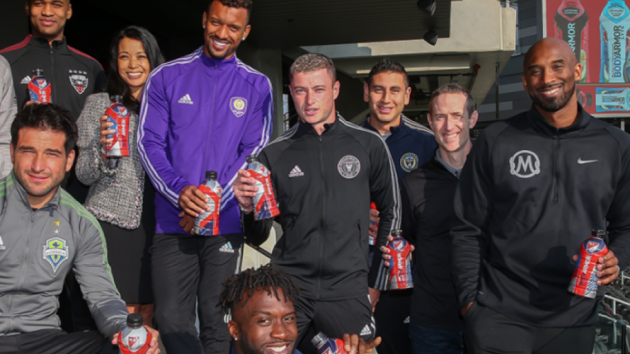 Sports drinks brand BodyArmor has extended its marketing ties with Major League Soccer (MLS) by becoming an official partner to 19 of its franchises.

Eighteen of the teams are due to play in the upcoming 2020 MLS season, while expansion franchise Austin joins the MLS in 2021.

BodyArmor’s products will be used by its partner teams during matches, with branding featured on team coolers, cups, and towels, with other activation opportunities also legislated for.

The team tie-ups follow the four-year deal BodyArmor signed with the North American soccer league itself back in September to become the official MLS sports drink.

National Basketball Association (NBA) star and BodyArmor board member, Kobe Bryant said: “Given the exciting growth of Major League Soccer as a whole and seeing the impact that each team has within their community, we couldn’t be more thrilled to expand our partnership to include 19 MLS clubs.”

Under the new arrangement the MLS and BodyArmor have also announced a new youth soccer initiative, which starts this season.

BodyArmor is now the second largest sports drinks manufacturer in the US behind Gatorade, which makes up 70 per cent of the US market, having increased its market share from one per cent in 2016 to 8.6 per cent in 2019.

The company also received a US$300 million minority investment by Coca-Cola in 2018, increasing its value to US$2 billion.